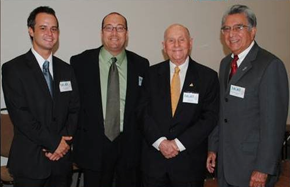 The Spanish American League Against Discrimination (SALAD) is an organization created in 1974, as a response to an emerging and evolving Hispanic population in South Florida. In its almost forty years, SALAD has been formative in challenging discriminatory practices in housing, employment, education and immigration.

Today, SALAD continues its mission to advocate for a vibrant and prosperous South Florida Community.

The Spanish American League Against Discrimination was founded in Miami in 1974 by a group of Hispanic and Cuban-American residents of South Florida as a response to the under representation at the time of Hispanics in the school System, local Government and the judicial system.

In its early years SALAD became recognized as a prominent civic entity, devoted to combating issues based on any type of discrimination, and for advocating in support of initiatives and legislation to promote diversity, inclusion and understanding among all ethnic groups in South Florida.